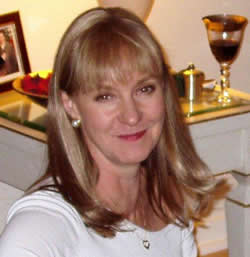 FlirtynotDirty is the brainchild of  Miranda Llewellyn who after a long and distinguished career as a professional dancer saw an opportunity to recreate the nostalgic days of flirtatious glamour and excitement with evenings of cabaret, fine dining and  romantic dancing ..

Comperes and speciality acts are lured from the bright lights of London to bring  fabulous , funny ,frivolous  shows to local venues, that ensure the best night out that you can have this side of the big smoke.

A graduate of the Arts Educational Theatre School Miranda started her career with the obligatory pantomime and summer season ( to get her Equity card) followed by  twelve months with a  Can Can troupe touring Europe.

This was swiftly followed by a coveted contract with the Moulin Rouge in Paris, where after a few months, bored with torn muscles, bruised knees ( jump splits are a killer) and frequent applications of Deep Heat she was promoted from the chorus to become one of the six danseuses nues, .. definite improvement and fabulous feathery costumes and more money!!

She was then accepted by the world famous Bluebell Girls and was sent to Spain as Miss Bluebell bless her, considered her to be “too short and fat” for Paris or Vegas!!!A year in Switzerland followed , performing her own solo act that broadened her horizons and improved her choreographic skills before she moved back to Spain to work in a hugely expensive show at The Lido, Madrid. At the same time she worked at  a sister nightclub, again performing her solo act.

She continued performing in cabaret working in Portugal, Luxembourg, Belgium, Italy, Holland, Finland, Norway, Denmark  as well as France, Spain and Switzerland  and appearing on TV and in various trade shows and promotional events, until finally she decided to “hang up her sparkly bikini”

On her return to England she started teaching fitness and dance and began working with Mr Motivator and regularly presenting on the Sunday Mirror Fit and Fun events, she also wrote the four star rated “The Nine Hour New You”,  published by Boxtree and regularly wrote for several fitness magazines.

At the same time she was technical advisor for The Boots Aerobathon fitness video and one of the lead instructors on the event of the same name in aid of The Royal Marsden Hospital which is recorded in the Guinness  Book of Records as the largest indoor workout in the world. The event raised in excess of  one million pounds.

She then acted as technical advisor on the  Fat Attack and Size 12 in 21 Days videos ( voted best fitness video by The Independent) and acted as excercise advisor to author Judith Wills.

Also during this time she teamed up with a friend and ex Bluebell Boy and together they staged a cabaret extravaganza at the thousand seater Blazers Nightclub in Windsor, now sadly a disco, but who knows what it may become in the future??

Mirandas strengths are as a choreographer and her ability to take any type of space, however small, and produce a spellbinding show designed uniquely for that venue.  In addition girls of all ages, sizes  and walks of life  come to her to dress, stage and design  solo acts for them whether to use professionally, as a confidence booster or a unique present for someone special. They know that whatever their abilities or flaws  they will be made to look gorgeous and feel fabulous.